All About Gary – The Founder of Orca Scuba Diving Academy

Two days later I found out what it was like breathing underwater. It was a small private swimming pool backing onto Kew gardens. Four weeks later 5 friends and I went up to Birmingham to complete my Padi Open Water training.

Three days pool and theory and then 2 days at Stoney Cove. That was quickly followed by a trip to Donegal in Republic of Ireland for a week to complete my Advanced Open Water. The diving in Donegal was great as well as the hospitality in the local.

After that I just wanted to carry on diving and over the next few years i was lucky to dive along the south coast from charter boats and from the shore. Diving wrecks like The Fleur De Lys and Kyarra out of Swanage. The Reindeer of the Isle of Wight with many a great Drift dive as a second dive.

These were quickly followed by my first trip up to The Farne Islands to play with the seals. By this time, I was working with a dive centre in Chelmsford as Dive master, helping out with the pool nights and weekends away in Open Water.

During this time, I made my first trip to the Sharm El Sheikh in the Red Sea. To see it on TV is one thing but to have it all around you is something you will never forget. Hard Corals of all colours, soft Corals swaying to and fro with the current. I have been back over 30 times now and will keep going back for more. 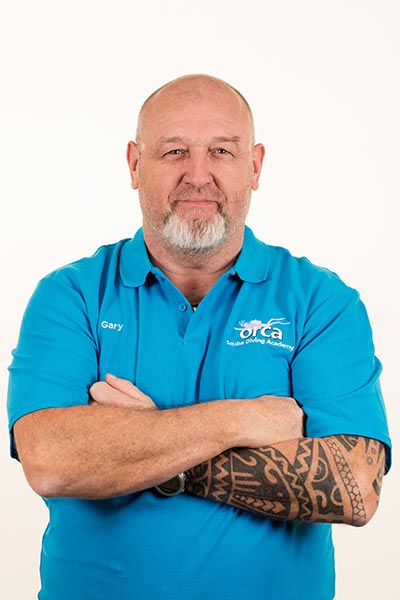 It was at this time that I started to think that maybe I should carry on and become an Instructor. So started many nights studying which does not come easy to me as I had just found out that I was Dyslexic, but with help from friends I passed the IDC and IE to become an instructor.

At this point I was running the family pool on a Friday night teaching snorkelling to the children too young to be on Scuba. From the age of 8 the Padi Seal Team and from the age of 10 the Padi Open Water Course. We had whole family’s learning. This started the idea that I should set up on my own and teach the way I thought it should be done, as my Course Director said teach people, not courses and this what I have tried to do at Orca.

So far so good, ORCA has been teaching since 2007. Thousands of people have had their first experience underwater with us and many have carried on and become qualified divers. Most of ORCAs staff have come through the ranks from Open Water Diver to join are team teaching others and helping out as and when is needed.