Peak Performance Buoyancy Speciality and Introduction to Diving in the UK

Following on from my article about my Open Water Certification, my (that is Ashley and I) first speciality course I wanted to do was the Peak Performance Buoyancy Speciality.  I chose this speciality to hopefully improve my buoyancy, which as a newly qualified diver (August 2018) whilst on holiday, wasn’t as on point as it could/should have been.

The course comprises of 3 elements, theory with knowledge reviews, confined water dive in the deep pool and finally two dives in open water to complete the skills required for sign off.  As the open water elements of the course would be our first introduction to UK diving we elected to do our course in May, thinking the weather, and more importantly the water, would be warmer.  We were booked in for the 4 May 2019.

The Tuesday before the Saturday dives, we attended the Underwater Studios in Basildon.  If you’ve not been before, this is a purpose built underwater film studio that Orca have access to most Tuesday evenings.  The pool is 12m long by 9m wide and 6m deep with a water temperature of around 30 degrees C.  It is the only purpose built permanently filled and heated underwater film studio in Europe with a removable roof.  And it is squirrelled away in Burnt Mills Industrial Estate, Basildon, just up from the Orca Dive Shop.

Vince would take us through our paces and have us undertake our pre dive safety checks, deep water entry, pre dive buoyancy check and then practice our decent and hovering.  The hover is one of the skills that I found difficult in the Open Water Course and had a tendency to use my arms to scull to keep in position.  This isn’t allowed as part of the skill set required, so some time fixed looking at a line on the side of the tanks was in order to maintain my hover.  Fine tuning of the depth was completed using breath control.

In addition to the hover practice, there were various shapes of pipework fitted together and weighted down with lead to swim through.  Again, controlling the height using breathing techniques and remembering that the tank on your back adds to the height you need to drop.  If you don’t drop enough the tank valve get caught on the pipe as you swim through, as I found out to my detriment.

During and after the session, Vince offered feedback and guidance in a constructive way to allow for adjustments as required.  All in all, an enjoyable evening and a feeling of confidence given if this was what we would replicate in open water.

Saturday came and the alarm clock went off at the unearthly hour of 06:00.  I’m not a morning person normally but I found myself awake before the alarm.  I’m not sure if this was excitement or nerves.

We arrived at Orca Dive shop and collected all the kit we would need.  A full length wet suit and a shorty, hood, gloves, boots, various weights, belt, BCD and regs.  Finally, a couple of tanks as we already had our own mask and fins.  Everything checked and then loaded into the car for a 07:30 departure to Wreysbury.

We were to dive with several other students, Russell the instructor, Paul DM and Steve as rescue diver.  On arrival at Wreysbury, we signed in, got kit together and then went through the briefing for the first dive of the day. 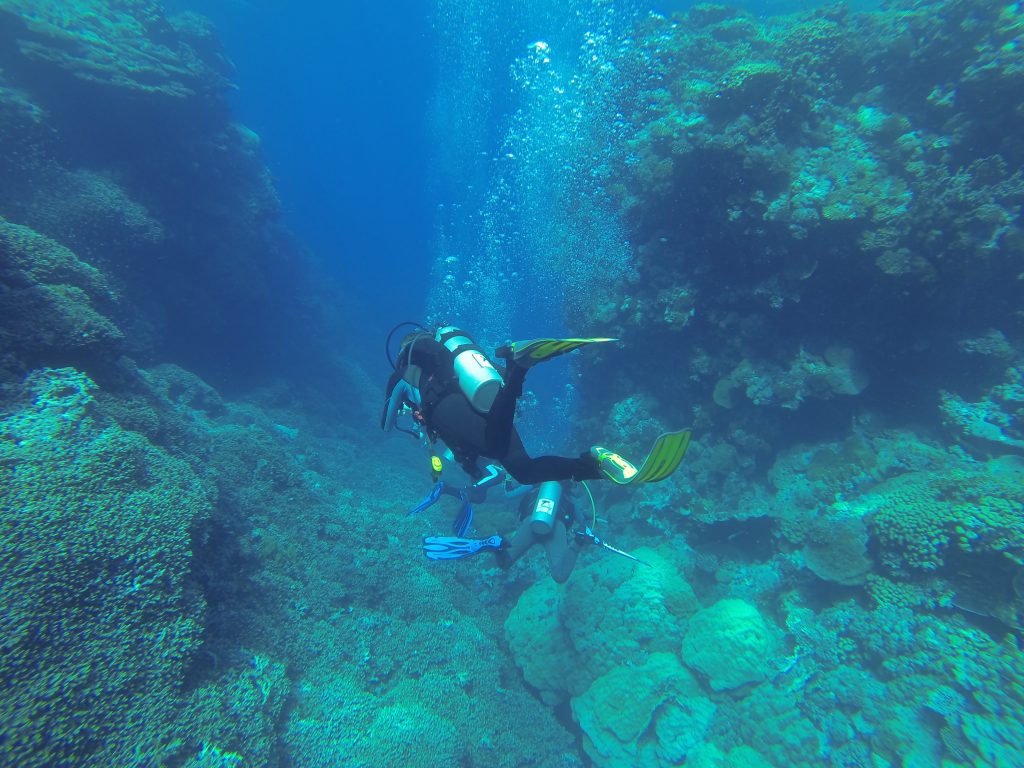 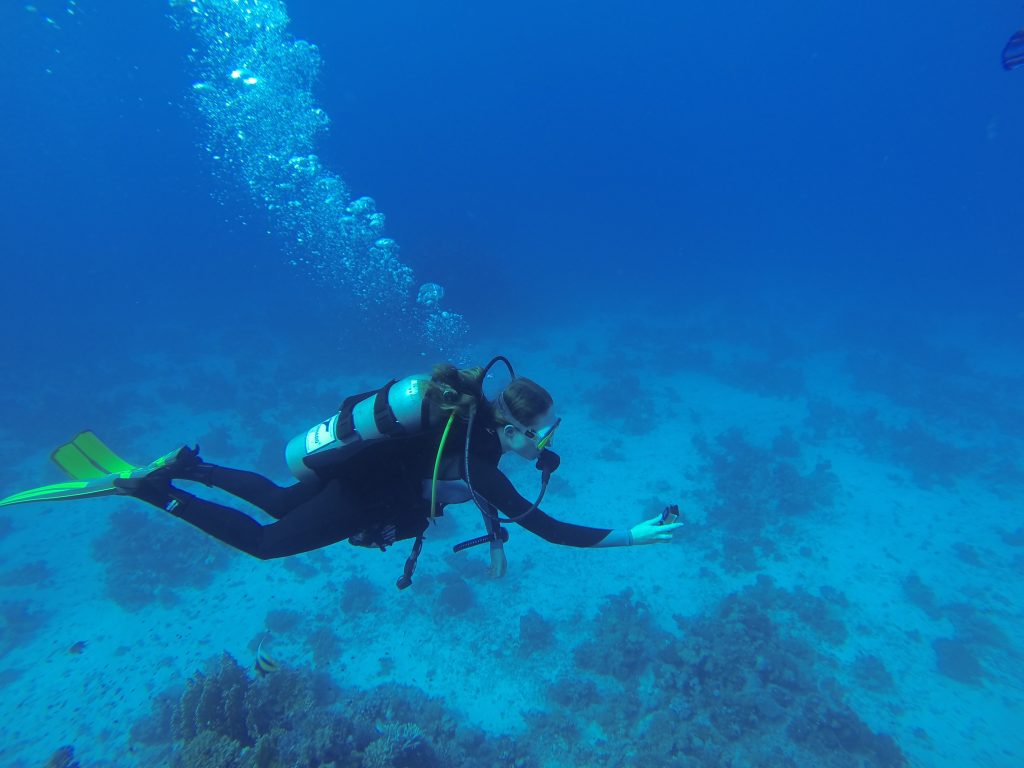 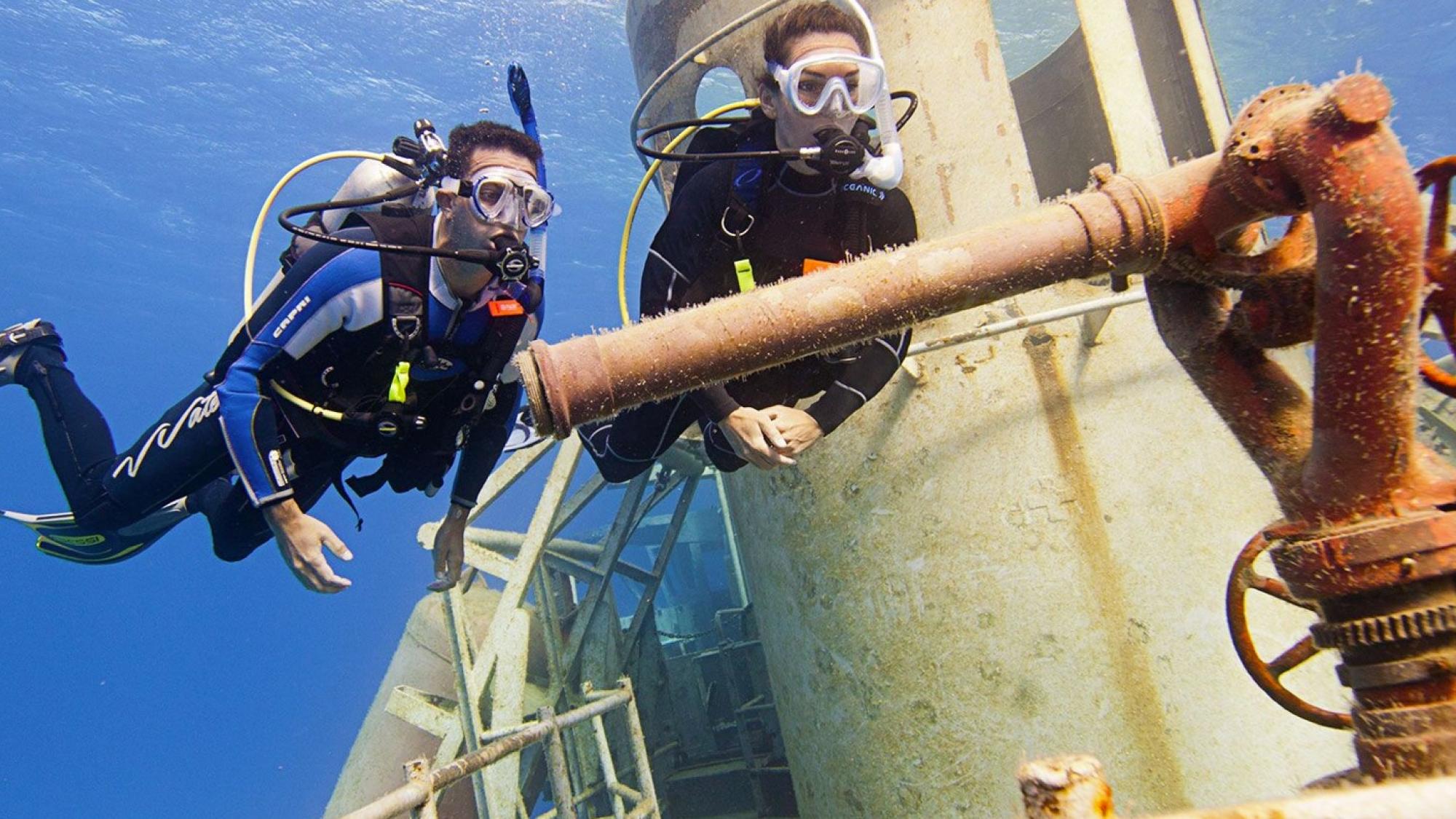 The first dive we went out to sets of square plastic containers with mental cages over them, that were stacked to give swim throughs and platforms to practice on.  We started at around 7m with fin pivots and neutral buoyancy practice.  Whilst we were undertaking the hover, Russ would take a student at a time deeper to the swim through.

Rather than swimming through all the way, we had to enter then hover in position neutrally buoyant for 60 seconds, not moving more than a 1m up or down.  This was difficult as the swim through was only around 2m square.

Once everyone had completed the skills, we took a leisurely swim back to the exit point for a post dive buoyance check. This was conducted with only 50 bar left within the tank, so we had to dump gas to undertake the final buoyancy checks.  This was to allow us to ensure we had the right amount of weight at the end of the dive, as well as the right amount that we had checked at the beginning of the dive.

After a debrief, we changed tanks and then grabbed a quick hot drink to warm up.  The water temperature was 14 degrees C at the surface, although the weather was sunny it was only 11 degrees C.

At 11m the temperature was the same as the air temperature, 11 degrees C.  As an introduction to UK diving this was a far cry from the 27 degrees C we were used too from our holiday in Turkey.  The visibility at Wraysbury was also considerably less than we had wasn’t on holiday, with 5m at best, compared to the average 20m in Turkey.

For the second dive we were to swim out to another part of the lake, to where there were submersible tubes that we could swim through.  Following a briefing, where Russ included that he wanted us to remove our masks whilst in a hover, we entered the water.

My heart was racing; my stress levels had jumped.  Take off our mask whilst in a hover?  I hadn’t seen that in the course/skills details and definitely wasn’t something that I had practiced.  And taking of my mask had been my nemesis on my Open Water Course.

We got to the buoy and all signalled to descend.  We arrived at around 7m above some more plastic containers.  The tubes were to the side of where we dropped down.  More fine pivots, neutral buoyancy and hovers were the skills.  With all the hovering and lack of movement, I started to really feel the cold.  Taken for a swim by Paul to try to warm up, we returned after a short circuit for me to take my place alongside the other students.

Then it was my turn to remove my mask in a hover.  I positioned myself and got ready to remove my mask.  I took it off and placed it back on as quickly as I could.  Clearing the mask, I knew it hadn’t actually cleared the back of my head. And Russ had seen this too.  So he asked me to repeat the skill.

I took the mask off, eyes tightly closed, and attempted to put the mask back on.  But it wouldn’t go back on.  I started to panic, took in some water and then panic totally set in.  I bolted for the surface, against all the things that the training had taught me.  Inflating my BCD as I kicked towards the light above me, Russ grabbed my leg to slow my assent.

On the surface I coughed and splattered.  Russ appeared alongside me, and his initial reaction was ‘what was that about?’.  He calmed me down and explained that I couldn’t put my mask back on as my snorkel had caught on my inflator hose. After a few minutes we both descended back down to join the others.

What I was unaware of was at the same time as I bolted for the surface, Ashley had gotten cramp and dropped to the bottom of the lake at around 9m.  He was assisted by Steve and returned to the hover practice.

We carried on from where we had left off.  And this time, slightly calmer I managed to complete the task, removing my mask and replacing, then clearing it whilst in the hover.  I then returned to practicing neutral buoyancy practice with the others whilst Russ took each student through the same skill.

Again I started to feel the cold.  The nature of the skills on the specialty meant that there was a lot of ‘hanging around’ and hardly any swimming.  Strange that seeing as this was a Buoyancy course!!  This time I was starting to shiver and I was taken for several circuits around the area to try to increase my core temperature through activity.

Finally, we were all complete and returned to the surface.  Russ commented on the descent that I had made after bolting for the surface, as a perfect descent position.  This was a real boost as I was feeling rather down and stupid for the panicked ascent.

Back on shore we de-kitted, packed up our gear and had a final debrief before heading back to the dive shop.  To my amazement I passed the specialty.  I thought the panicked ascent would exclude me from completing the course, and I was still beating myself up about it.

One thing for sure, was that our next course was going to be a dry suit course, as there was no way I wanted to feel that cold again.  It also helped me make the decision that Jasmine, who was almost completing her confined water skills for her Open Water Certification, would also need to do a dry suit course as she, being significantly smaller than me, feels the cold far more than I do.

Within a month, both Ashley and I had signed up to complete our Advance Open Water and Dry Suit combined course. And Jasmine was booked for her Open Water Dives with combined Dry Suit course. See the next article about my experiences of the Dry Suit Specialty and Advanced Open Water Course.