A blink of the eye and it’s all over. For the last 3 months I swapped the drudgery of day to day life in the UK for the paradise that is Belize. It was my first time traveling alone and I fell in love with this beautiful land from the word go! Looking back at my time spent there, I learnt so many valuable skills, met amazing people, got to work with some of nature’s most beautiful creatures and applied my knowledge, time and care towards two conservation projects.

Sarteneja, the small fishing village north of Belize, was my home for 3 months. My first stop was a conservation called Wildtracks. A non-profit cooperation, achieving results through strengthening national and site level conservation of ecosystems and species, building engagement with environmental issues and strengthening capacity towards effective stewardship at all levels. It was founded by an English couple, Paul and Zoey, who are highly committed to the care of the animals, bringing awareness worldwide but also to the local citizens in Sarteneja.

Over my time spent there I experienced all sorts of weird and wonderful things. From being visited by rattlesnakes in my room and lots of other creepy crawlies, to caring day and night for my favourite! The Antillean Manatee; a sub-species of the West Indian Manatee. Along with other endangered or rescued animals such as my three Raccoons: Mr Paws, Theodor and Victoria.

My days consisted of waking up every morning to watch the sunrise over the lagoon. Then the first manatee feed was at 6:30am, where you would prepare the milk, consisting of powdered formula, bananas, water and vitamins. The Manatees were very particular about their milk; if we were out of bananas they would refuse to drink it, or if it wasn’t blended well enough, leaving chunks of banana they would also refuse to take it. Yes, I know fussy creatures! But never the less it never got tiresome, even though at times it was challenging. I was often tired, being constantly attacked by mosquitos, smelt of old milk and stinky lagoon water, and you would never know what each day would bring. Sometimes your manatee would feed in 10 minutes, other days you would be waiting around for ages. Patience, staying calm and being quiet was vital when caring for them as they can feel the vibrations in any loud noises through the water, which would spook them leading to them splashing you with their tail, which you had to be extremely weary of, as it could break bones if you got hit by one. 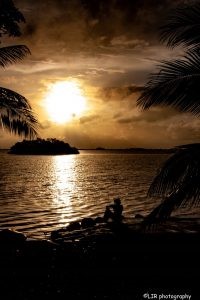 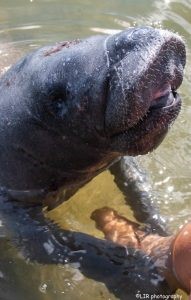 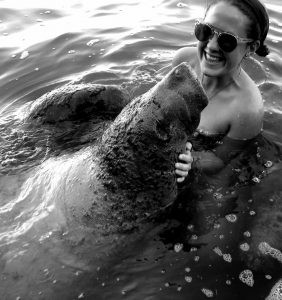 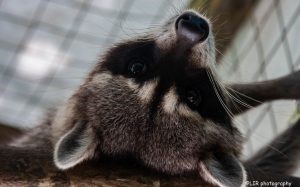 My manatees had another 3 feeds throughout the day, alongside the milk they would have. We would go sea grassing every day, maybe sometimes twice depending how much we could pick. Depending on how many manatees we were caring for at the time, we would either stride out in the lagoon with buckets and individually pick each strand of seagrass, or we could Kayak out further where we would also go mangrove picking. Both were important to the manatee’s diet and progress in rehabilitation.

The stages of rehabilitation consisted of three stages. The first 72 hours in care are critical. Calves normally arrive dehydrated and emaciated, often with their skin stretched over a clearly visible skull and ribs. Every calf is offered rehydration solution, then measured, weighed, and introduced into the intensive care pool. The calf has constant contact with the carers, who sit in the pool for the first 48 hours and then continues to be monitored 24 hours a day for at least a week. Here time is spent encouraging the manatee to develop normal manatee behaviour and to eat their natural food.

The seagrass is given at all stages of rehabilitation and placed on the base of the pools, fastened in a PVC frame to get the manatee use to the feeling of pulling it from the lagoon floors. As the calves grow they are then moved into the lagoon enclosures, which is where I looked after my manatees. The lagoon enclosure allows them to learn about natural water flows, changes in salinity and temperature, to seek shelter and to harvest the mangroves, which we would weave through the fencing. Once old enough, the calves are fitted with a satellite tracking device and enter soft-release- where they could roam around free in the lagoon. Soft release is critical in the preparation for a successful reintroduction to the wild and provides time for them to not only learn about the wild environment, but also to be gradually weaned off human dependence. My time spent with these docile species was truly unique and special and leaving them was extremely hard, but I hope to revisit sometime in the future.

On to my next adventure, where I was taking part in a 6 weeks expedition with the conservation Blue Ventures, based at the Bacalar Chico Marine Reserve, collecting critical marine inventory data on the largest barrier reef in the western hemisphere. The first week was based in Sarteneja once more and knowing the town and the locals for a month prior to this, I already felt very welcomed and close with the Belizean families. I got the chance to immerse myself in the Belizean culture, by staying with a homestay, taking part in cultural exchange sessions and receiving science training, which allowed me to take part in the surveys on the island. I thoroughly enjoyed both my stays in Sarteneja and at Bacalar Chico reserve. Becoming very close to my homestay family and feeling a part of the community.

We than travelled to a remote island where we got to dive every day for 6 days straight, dependant of weather sometimes 2 or 3 times a day. I stayed in wooden eco cabanas surrounded by iguanas and raccoons, washed in salt water and lived as wild and free as you could imagine. The dive camp was all eco-friendly, everything was reused and built from natural resources. We were miles away from civilisation and had no way of being contacted. To start off with anything is hard to adapt to that you aren’t used to. In our culture we take the things like fresh water to shower in for granted or having constant use of wi-fi. To be on an island for this long with the bare minimal, teaches you to remember the importance of being human. Talking to people, socialising with others from around the world, reusing materials or fixing them when they break, not just throwing them away. The island for me, was another eye opener, a unique experience that I’ve been lucky enough to experience and the diving was incredible. I feel I learnt so much about the marine species and the conditions of the coral reefs. I got to be a part of lionfish culls and learn about the disruption they are causing. Every time you dive somewhere new or with a whole new group of people, you are constantly improving your diving skills, having to adapt to different conditions and learn other ways of teaching diving. I got to dive with some of the most professional and relaxed people I’ve ever met. Davide and Jen, head of the exhibition, both instructors were naturals under the water and on land. They were so reassuring and understanding and a delight to spend my time with. Throughout this trip I got to meet some incredible people and have made lifelong friends from around the world. So, for me it wasn’t just one thing that made me fall in love with Belize. It was all of it. The nature, marine life, conservation, living conditions, travelling, learning something new each day and spending time with likeminded people, that had the same aim in mind; to help protect our natural world. All I would say is if you get the chance grab it whilst you can, no dream is ever too big to achieve!