As Kevin and I are merely Divemaster trainees we have been given the most envious job of letting you all know how the Orca trip went recently. There were 11 of us in total with 10 diving. The first part was six days diving in two places; Aliwal Shoal then Protea Banks, followed by three days safari, which five of us stayed on for.
After leaving the UK and travelling for seventeen long hours we finally reached Durban. With cases and belongings all collected we met our BlueOTwo representative for an hour’s journey to Agulhas House, Umkomaas. After about 2 hours, our driver who obviously didn’t know where we were going and having to do various reversing manoeuvres with a large trailer on the back of which he failed miserably, we finally arrived at our destination. I think all of us were exhausted by then but we were given such a lovely heart-warming welcome by Michelle and staff that it was promptly forgotten. We then got organised, had a meal and started looking forward to our first day of diving on the world famous Aliwal Shoal reef in South Africa.
After an early breakfast we set off for the short drive to the lagoon. We all got on the ‘rib’ and donned our life jackets. Feeling like we were SAS commandos at top speed, we went under the bridge and out into the sea. We had clear instructions to hold on tight as we attempted to cross the surf. With the skill of the driver we negotiated the waves and safely got out into calmer waters. There was then a short ride to the dive sight but it was very bumpy all the way.

Michelle gave us a briefing then it was time for our first dive of the trip. All of the dives are drift dives and you follow the guide. I think we were all surprised with how much life was on the reef. In between dives bobbing up and down did not agree with six of us and poor Iona suffered terribly. After the second dive we headed back to the lagoon and it was a lot easier to ride with the surf. In the afternoon micro lighting was on the agenda for some of us, whilst chilling by the pool was preferred by others. All those who did the micro lighting thoroughly enjoyed themselves and everyone had a very enjoyable first day. It was discussed after dinner that night that we would be doing the long-awaited baited shark dive first thing in the morning.
I don’t think Kevin and myself were the only ones full of trepidation about this dive but we were also looking forward to the experience. Out in calmer water with the bait balls on board, we headed to the dive site. When we were nearly there, we passed another boat that was in the process of lifting a shark cage back on board. Kevin and I looked at each other and thought we’re not using a cage. As soon as the bait balls were lowered into the water the sharks appeared from the deep, swimming around the boat. At this time, I admit I was scared but Michelle gave us a good briefing then we launched ourselves in amongst them. Surprise and bewilderment were on all our faces because we were all there floating about surrounded by about 20 oceanic black tipped sharks not feeling threatened at all. I can only speak for us two but we thought the dive was awesome and loved having the chance to achieve most diver’s dream, to swim with sharks. A lot of footage was recorded of this memorable occasion for everyone to see. On the next dive following the reef, we were fortunate to see a couple of very large Potato Bass and finishing off with a glimpse of about ten Eagle Ray’s. In the afternoon a few of us were taken to Croc World where we had the chance of getting close to the fearsome predators whilst others frequented the beach bar.
Then next day the two dives were on The Cathedral and Raggies Cave. The Cathedral was fairly deep and was nice to enter and swim around with a nice resident Potato Bass. Then off to Raggies Cave, where we only caught a quick glimpse of a ‘raggy’ making a quick exit out of the cave. Every dive was full of life and the visibility was pretty good.
Our final day’s dives on Aliwal Shoal were on the wreck of The Produce followed by a reef dive called Manta Point. The wreck was at nearly 30 metres so not a lot of time to swim around but it had a lot of life and you could swim through part of it. The last dive was a lovely shallow reef dive which was great to finish off with and I recorded my longest dive here of 80 minutes. Aliwal Shoal had lived up to its reputation and the care and attention we received from Agulhas House and dive centre was excellent with Michelle and her staff who couldn’t do enough to for us. 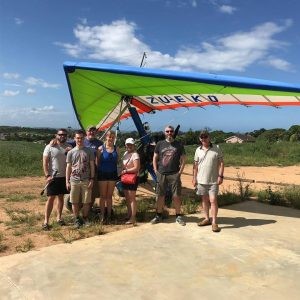 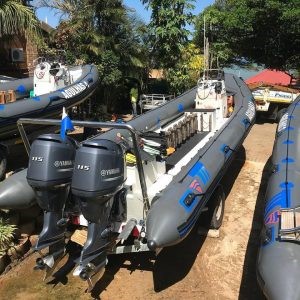 We were then collected from Agulhas House for an hour’s journey to Shelley Beach where we would be diving on the renowned Protea Banks. Eventually we arrived and got all the equipment ready for the next day then we were taken to our hotel. As we were only on a bed and breakfast basis here, we all went out for a meal in the evening. We were picked up bright and early and taken to the harbour for the days diving. The dive briefing was thorough to say the least and current was a big factor. Roland, our dive guide, wanted us to keep together as a group to make it easier to control the dive. The boat then had to be pushed out into the water by us, which wasn’t an easy thing to do. Once we were safely on board, we set off for the dive site. We would be coming back to the harbour in between dives this time. Arriving back at the harbour we all had to brace ourselves as the boat was driven straight up onto the beach. Then we had to wait for which way the boat would tip towards, this always appeared to be the side that Gary was sitting on. We all found this quite amusing.
These two dives were deep and on the first dive we managed to see a pod of dolphins followed by a great hammerhead shark, with yet another hammerhead passing us a lot closer. On the second dive Roland took us to a cave where there were seven Ragged Toothed Tiger sharks. We all couldn’t believe what we were seeing; so many sharks in close proximity. Everyone had a big grin on their face. It had been an unforgettable day on Protea Banks. Unfortunately, the following day the weather had turned bad for us with lots of wind and rain so the days diving was cancelled. Instead we were taken out for a tour into the countryside to have a look around. We visited an area that was slowly being destroyed by a concrete factory then off to a Christian run crèche in the hills where we got to see the children. We had a look in a traditional South African round house and then it was time for something more adventurous. The Wild 5 consists of a wild gorge swing, water rafting, abseiling, wild slide and the wild suspension bridge. Nick, Harry and Iona all had a go at the wild gorge swing which wasn’t for the faint hearted. You can view Nick’s footage of this on Orca’s Facebook page.
The next day we had to say our goodbyes as five of us were staying on for a three-day safari and the rest of the group were flying home. We were fortunate to be in the safari bound group. There was a five-hour journey to Hilltop Camp for us but this went very smoothly with lots of stops on the way. For Russell, who had brought his wife Tracey with him a non-diver, this was going to be the highlight of the holiday. We arrived in the afternoon, settled in, then at 1700hrs we all met for our first game drive of six. Boy it was chilly; a lot colder than we thought it would be. We were chilled to the bone when we got back to the camp but we had seen Rhinos, Zebras and Buffaloes so we were all happy. Kevin and I only had our cameras on our phones whilst Tracey had a camera with an enormous zoom lens looking quite the professional. With a nice hot soup and buffet dinner to follow, it was early to bed as we were back out again at 5 in the morning.
Another day with two more game drives planned the weather turned very hot. We still had to wrap up for the drives as being in open topped vehicles you only needed a little wind to get chilly. Hyenas, Rhinos, lots of birds, and an Elephant were spotted this time. It was decided to combine three game drives into one long one, so the next day we met up at 0530hrs for the nine-hour tour. With breakfast and lunch on the jeep we set off on our day out. It was a great day, we had lovely weather, saw loads of animals and at times the scenery had been absolutely breath-taking. At one time we did come across a herd of Elephants that were in a couple of groups and our driver, named Welcome, had to quickly put the vehicle into reverse as a bull elephant thought we had got a little bit too close for his liking. The only animal that avoided us was the Lions but the five of us had really enjoyed the safari experience. We are now waiting to see the wonderful bird and wildlife photographs from our expert photographer Tracey! The next day on our journey out of the camp we managed to see Giraffes close up, which was a nice sight to remember. We soon arrived at the airport ready for the long flights home to the UK.