So an early call on Monday morning, still dark outside and off I go to Gatwick airport, to meet Mark from Oyster Diving, a London based Dive Centre, and then on a flight to Barcelona.  I was lucky enough to be one of a chosen few to be invited to Spain on a familiarisation trip to Spain; the idea of running dive trips to the Country.

In the past, we have gone to the usual destinations; Red Sea, land based or liveaboards and long haul.  Spain had never really featured.  So when the opportunity arose I gladly accepted and went with an open mind.  After getting through customs, I met up with Mark at Pret a Mange before boarding the flight.  Sitting next to each other, we had plenty of time to talk about our individual Dive Centres and what we hoped to gain from the trip.

On arriving in Barcelona we met another participant, Steve, and together we travelled to L’Estartit.  The journey was entertaining as we all came to the conclusion the driver was trying out for the Formula 1 team, but we all arrived in one piece.  No sooner had we arrived, we met up with the rest of the guys, and just about had enough time to throw our clothes in the room and grab our dive kit and go diving.

We made the short trip down to the harbour and straight on to one of Uni-subs three dive boats for the short journey across to the Medes Islands.  The islands have many dive sites around them.  With a little bit of inclement weather, we had to dive one of the inner dive sites; Les Farranelles.  At a depth of 25m and a visibility of 10/15m, it was a fantastic dive teeming full of life.  First thing that greeted us was a moray eel, watching us all descend.  As well as this, we had numerous large groupers, a few scorpion fish, a barracudas and amber jacks.   This was a great way to start the trip.  Upon surfacing, climbed back aboard the boat and then back to the harbour. 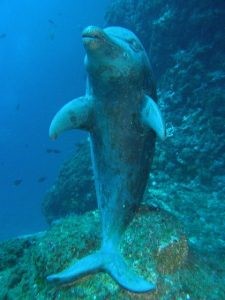 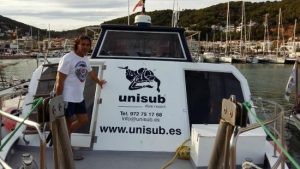 Once back at the harbour, we were shown around Uni-subs pump house, which they share with two other Dive Centres.  This was a purpose built building with four bauer compressors.  A very professional and well organised operation with a great team helping to run it.  Then we returned to the hotel for the first of the evening meals.

Food was to become a major part of our trip.  We all know the Spanish enjoy their food and this was evident with the amount of food we were given.

Day two; the coach picked us up in the morning and we travelled South to Palamós and dived the wreck of the Boreas.  This wreck had been confiscated by the Government and sat in the harbour for a number of years before being deliberately sunk as a dive site.  Sitting in 30m in the entrance to the harbour, it was only a short trip from the quayside before we descended onto the wreck.  The wreck was 30m and rose 5m from the seabed.  As with the other wrecks, there was an abundance of life, including as small octopus which we spent 10 minutes watching.  Back to the harbour and more food!  This was a seven course lunch.  The food was amazing but we had to go diving afterwards, so everyone was thinking along the lines of how much extra weight we needed to sink!

We then travelled back to L’Estartit for a second dive on the Medes Islands; L’Escrivana.  This was located near to the first dive site on the islands but with a different topography.  Again, an abundance of life and a great dive.  We returned to the harbour, back to the hotel, quick change and then we headed South again to meet another Dive Centre.  We were due to dive with these guys on Wednesday but due to the weather, this couldn’t happen, so we went and met them Tuesday night.  Then back to the hotel and more food!

Wednesday morning, 9am start and off to Girona.  The guided tour of this beautiful medieval city including locations used during the Game of Thrones filming.  For those of us who watch the series, it was interesting seeing where it was filmed and took the walk of shame.  After the tour we ended up back in Central Square at a lovely restaurant and more food!  As dessert was being served, Jose reminded us that the coach was picking us up at 3pm.  Unfortunately it was ten past four!  After a short trip back to the hotel,  we got ready for the evening reception held in the local yacht club, giving us a chance to meet numerous local dive centres to find out what they offered.  As well as diving, it became evident that there are lots of different activities for all.