After only diving for 3 months I feel like it’s a huge part of my life already. I aspire to become a marine biologist someday so I decided to volunteer in Fiji by taking part in a marine conservation project for 7 weeks.

My first night was quite uncomfortable- the airport lost my sleeping bag but I soon got it back.

Showering with cold water was not as bad as I thought it would be… but… I had the most traumatic experience ever. As I was drying myself, I saw the biggest rain spider, which looked tarantula-like, climbing up my leg. Crying to myself I thought things could not get worse, but they did… the shower pipe fell off the wall and water poured out violently everywhere, all over me, all over my towel and all over my clothes. So I came out traumatized and soaking wet.

Diving in the crystal clear waters of Fiji is incredible; there are so many fish to see. So far I have seen a ray and puffer fish. Compared to diving in the UK, besides the visibility, the kit set up is a lot easier- there is no need to use a hood, gloves or multiple wet suits but just one thin 3mm wetsuit. This means it is quicker to get ready before each dive, however there is a long walk through the woods to get to the boat which can be slippery if it has rained.

This was my first time travelling alone so I felt a little scared before I left and I was dreading the 2 long flights, adding up to 22 hours. But it was completely fine, the gates were very easy to find.

Arriving at Nadi airport I met Daisy, another volunteer and we were greeted by Doryan who was waiting with the other volunteers. We had a 4 hour coach journey followed by a 45 minute boat to the island of Beqa. The views were surreal and to top it off… they have Oreos!

Adjusting to the basic life on camp I thought would be a challenge but I got used to it pretty quick. The other volunteers and staff were very welcoming. I have learnt a lot about conservation of the ocean, but I have also learnt many skills such as cooking.

During the dives, surveys are conducted for fish, invertebrates and benthic, which are useful for checking the health of the reefs. Every Thursday we help to clean the reef by removing rubbish, such as cans, glass and fishing lines. Whilst we dive we make it more fun by one diver taking a toy monkey known as Eliki, they have to attach it to someone else and whoever comes up with it has to do a chore on camp such as making brownies for everyone. 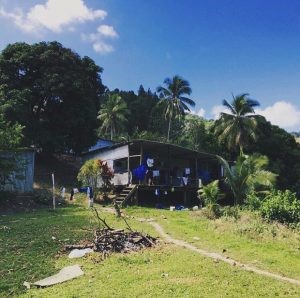 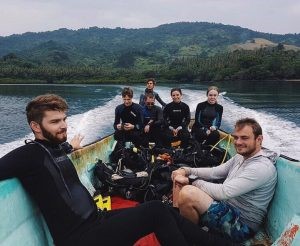 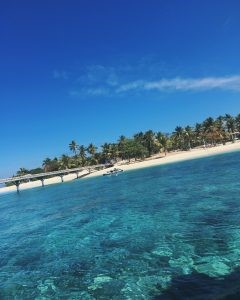 Each week we dive Monday til Friday and have the weekends off. We all went back to Nadi for my second weekend to say goodbye to 7 volunteers and celebrate 2 birthdays. It was so nice to stay in luxury with warm showers, a comfy bed and to finally eat some pizza, which I had been craving all week. For the evenings we went out for dinner followed by a bar and karaoke. We even went to the cinema to see Mamma Mia- it was great fun. Before I returned to Beqa, I made sure I stocked up on Pringles.

Unfortunately the compressor broke so had to be sent away to be fixed during the third week. This meant we could only dive once but we were able to go for free to a faraway site called 008, which usually costs money to go to. I saw a turtle before I even got in the water.

A lot of snorkelling and free diving was done during the week without a compressor. We visited an amazing site called Sand Bar which had crystal clear turquoise water, just like a postcard and is known for being a shark nursery. To finish the week, myself and 3 others climbed Bread Mountain- it took 2 hours to get up and 5 to get down. It was an adrenaline pumping experience involving abseiling down waterfalls, holding just onto vines hoping they wouldn’t snap. Nearer the top it was very steep and so hard to not fall, I completely destroyed my trainers and my trousers even split in half. It took us so long to get down because we took the wrong path down for 30 minutes, so we had to go all the way to the top again- they nearly sent a Fijian search party out for us. We were so lucky to make it back before sunset and also lucky no one broke anything.

Wednesday 8th August, I had my best ever dive yet at Sici. The visibility was at least 20 metres and I saw my first shark in Fiji. I had 2 sightings of a white tip reef shark- she was very curious and kept coming close. Before I saw, my dive buddy kept tapping her tank to get my attention, I was confused as I didn’t see anything but apparently there was a shark right next to me whilst I was completing a benthic survey. I always went on about how much I wanted to see a shark and always asked the possibilities of seeing one for each site, so she was confused why I didn’t look excited as she thought I saw it. I realised what was seen as we went over to the other divers and Jack wrote “SHARK” in massive writing on his slate. Then there it was, right in front of me. Everyone was ecstatic/buzzing when we came up to the surface- one diver who has dived in Indonesia, Thailand, the Philippines and many more places, said that this could possibly be his best ever dive.

The following day I was able to take another volunteers dive since she was still away on mainland. We went to Sese which is known for a ship wreck. The site was so shallow that our boat nearly beached on some coral. I saw my first ever octopus there, it was so cool seeing it change colour to camouflage with the rocks.

My final month began with new volunteers arriving and the compressor being back up and running! From there just being 3 of us for a week to there being a full camp of 20 was so stressful to begin with. I would have to get up early to have time to make breakfast as there’s only one oven with just 3 hobs and there would be a very long wait for the shower after every dive. Thankfully all of the new volunteers were lovely and I have even made some friends who I have arranged to meet again back in England. 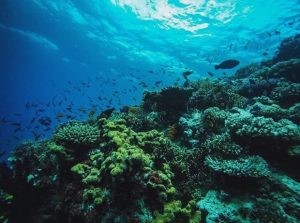 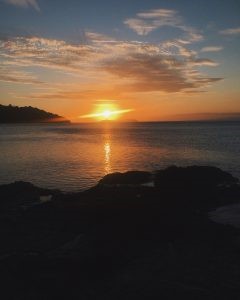 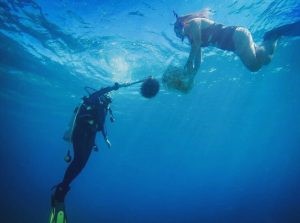 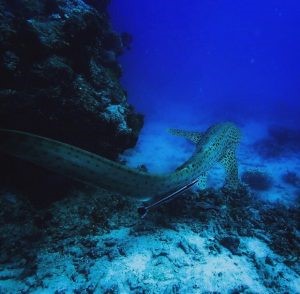 The last month on Beqa was definitely the best but there were some eventful moments. The cats had found and eaten all my Oreos. Walking back from watching the sunset with Katie, we ended up in the woods surrounded by at least 30 massive spiders. A handle of a pan broke so boiling oil spilt everywhere. Most of the food ran out. Then I took the new packet of Oreos out of my food box to share with everyone… but… George the cat had clawed part of the packet open and there was thousands of ants coming out of it.

I was very lucky during a dive at a site called Milky Bar- myself and two others sighted a leopard (zebra) shark which is very rare to see. I also saw a massive puffer fish literally a minute after followed by a school of barracudas. Usually it’s quite uncommon to see any shark at the sites in the bay.

During my sixth week I became brave enough to dive with bull and tiger sharks without a cage. This day trip was with Beqa Lagoon Resort at a site known as ‘Cathedral’ and involves two half hour dives to increase the chance of seeing a tiger shark. There were so many dolphins, even a turtle and a manta ray before the dive during the hour long boat ride. The visibility was amazing- at least 50 metres and it was unreal the amount of fish there were right in front of me. Soon after positioning myself behind a wall, the shark feeders let the food out and then there was about 20 massive bull sharks so close to me. It was so fascinating but also a little scary- at one point food was dropped very close to my head. I used so much air from all of the excitement. Unfortunately it took me 3 hours to get my kit back as it was left on the boat which had gone all the way to mainland, but we all stayed and ate dinner at the resort.

My last day diving on Beqa couldn’t have been better. I saw 2 blue spotted ribbon tail rays in the morning and then in the afternoon I saw a turtle swimming, which was incredible. To end the day I learnt loads of new card games and I won 3 times during cambio.

One of my last dives in Fiji involved a crown of thorn starfish removal. Crown of thorns are a threat to corals which they feed off of so need to be removed to prevent them from overpopulating. To do this we had 4 divers to extract the crown of thorns and then 4 snorkelers above with buckets ready to collect and take to the boat. It became a bit of a competition- I removed the most at 5, Kristen and Charles removed 4 and Jacob removed 2 so he had to do a chore on camp for removing the least!

Leaving Beqa was quite emotional, the 7 weeks I spent there flew by and I didn’t think it would end so soon. There were 4 of us leaving so we all went to mainland together for the weekend. I went with Katie to a floating bar in the middle of the ocean Saturday and on Sunday we all went to MalaMala Island, which was amazing and a good end to the trip. I learnt how to paddleboard, although I kept falling in. For the final night we went to ‘Awesome Grill’ which is a restaurant I ate at on my second weekend with the old volunteers, it was lovely to go back. There was another volunteer who was on my flight which was nice as we met up at each stop.

If I was given the opportunity to do this all again, I definitely would. I really enjoyed the project I went on, I learnt so much and I met so many people. I didn’t want to leave. It has also made me realise how much I enjoy diving, so I would love to do marine conservation again somewhere else. I would love to go back to Fiji in the future as I feel like there’s still many islands I would love to see but didn’t get the chance to this time around.

To participate in this project I needed PADI Open Water and Advanced Open Water qualifications, which I completed with Orca Scuba Diving Academy, who were amazing. I am looking forward to coming back and hopefully
becoming a Dive Master at some point.